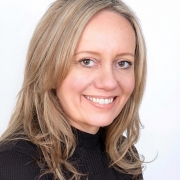 I have always been ambitious. At secondary school when thinking about my future, I’d have images of owning a large house in Roehampton Lane. Why a house in that particular street?
Because I spent my 8th and 9th year living in two of them.

The two 9-bedroomed houses I stayed in

No, I’m not from a well-to-do family. My parents separated when I was 4 and my mother raised my sister and I in a council flat in Fulham, on very little income. Hot water bottles kept us warm. We shared bath water once a week. I had hand-me-downs from my older sister – which were purchased from charity shops to begin with! My mother tried her hardest to support us, working part time while striving to get her musical career off the ground. Our humble, 2 bed flat would sometimes become a music studio with mum singing and playing guitar, a bass player, rhythm guitarist and keyboard player (thankfully, no drummer!)

The three of us joined a group of family friends with their children, to go and live in an empty house in a location within walking distance of Richmond Park. It had no electricity supply and no heating (I was too young to know why that was) and after a year, we were asked to leave so moved in to the one next door, again with no basic utilities. As kids we didn’t care. The novelty of the huge garden made up for it; with fruit trees to pick from and large shrubs to hide in. Our cat (Claudius) loved the freedom and for the first time started bringing mice into the house. We’d all congregate in the main drawing room, light the fire and tell ghost stories in between singing songs along to live music, courtesy of our mother and her acoustic guitar.

So the taste of this kind of life gave me an appetite to work towards it in later life. “I will have a house like this, and raise a family in it.”

At 13 I started a car wash business. I hand-wrote business cards and popped them in letterboxes around Redcliffe Square in Earls Court. After washing about 8 cars I decided this was not a great money-making scheme…

I moved around quite a bit while growing up: Fulham, Acton, Chelsea, Kent, Earls Court, back to Fulham, back to Kent and back to Chelsea which didn’t help my school and academic life! The year that O-Levels changed to GCSE’s was the year I left school – at 16 without sitting a single exam. I wanted to earn money and going through university (as recommended by family and teachers) seemed way too long a process in order to start my working life. After a few dead-end jobs I worked as a silver-service waitress in in an exclusive private business members’ club in Belgravia and again got to see how the other half lived.

It was there that I met the person I wanted to spend the rest of my life with – the man I could imagine raising a family with in my dream home and location. 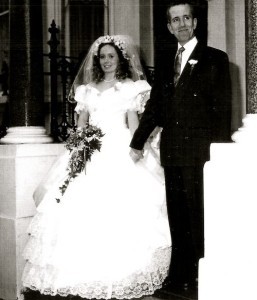 With my dad on my wedding day

2 years later I was married with a baby son, living in temporary housing in Stratford, East London and my husband was working all hours as a chef to support us. 6 months later we moved to the historic town of Bury St Edmunds, Suffolk – a place I knew nothing about except that a couple my husband knew lived here. 18 months later our daughter was born and it was time to move to a larger house. I’d already been fighting for a relocation by sending letter after letter and making call after call to the local authority – we didn’t have a deposit to purchase our own property. We eventually got moved to a good sized house on the Norfolk/Suffolk border in the September. By Christmas my husband decided to leave.

There I was, with a 3 and 5 year old, no car, no job and no income. But I made a go of it. As soon as they started school I started studying. I decided to start a degree in Computing and IT with the Open University while having several part time jobs. Then, with what I had learnt, I started a web design business. I had a good eye for design and what I didn’t know, I outsourced to students that I communicated with via the Internet. I got quite a few clients and got a full page feature in the East Anglian Daily Times about single mother entrepreneurs!

2 years later in 2001, I got involved with a building company who were developing a software system for themselves. It was so good that we (four of us) decided to start a software company and put it on the market. None of us had run a software business and we did everything ourselves. On many occasions I’d be up until 4 or 5am designing the website, brochures, CD inserts, etc. and printing them out on my humble, inkjet printer. By 2002 we were exhibiting at the UK’s largest building shows and advertising in trade magazines as well as online. We turned over £127k with a small profit of £26k. By 2003 we had 18 sales agents around the UK and Ireland and turned over £1.2million with a large profit of £297k! The business grew rapidly with so many customers that we found it hard to support them all. Builders were our market and they are not the most IT literate; being very hands-on rather than the key-pressing or software breed. 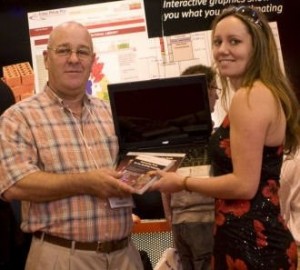 At our exhibition stand, awarding a prize to a customer

The success of the business allowed me to purchase a house (and extend it), buy a decent car and have a 5 room annexe built at the bottom of my garden.

In 2010 (after 9 years of working long hours) I decided I’d had enough. My children were then 17 and 15 and I wanted to spend more time with them. I took a 9-5 job as a business manager in a garden design company, where I gained an NVQ in Business Administration and a Practitioner Licence in Prince2 Project Management. The designer won Gold medals at Chelsea Flower Show and part of my role was organising the plant and tree orders with suppliers for the show gardens, also managing JCLI contracts with multimillionaire clients. I had no knowledge of landscape architecture and was employed purely to manage and market the business, office and projects.

On July 31st 2013 I was made redundant. 2 weeks later I was offered the role of UK Marketing Manager in a global business coaching franchise company (ActionCOACH). They were so impressed with my marketing and business experience that they gave me the sole responsibility of managing the national marketing; not only to gain new franchisee coaches, but for their 70+ existing coaches around the UK.

During my time there, I learnt so much more about business success which made me even more determined to once again, be my own boss. My children were 20 and 18 and a lot more independent. So in November of 2013 (3 months later and after some thought) I left the job to start a marketing and design business, with the global coaching company being my first client.

The name ‘bellüber’ comes from my family name (Bell) and the word über, which means super (I’ve been called a superwoman for juggling work, house and children!)

So here I am now, running a marketing and design business on my own terms and loving every minute!

Want to join the discussion?
Feel free to contribute!

This site uses cookies. By continuing to browse the site, you are agreeing to our use of cookies.

Cookies are small files saved to the user’s computers hard drive that track, save and store information about the user’s interactions and usage of the website. This allows the website, through its server to provide the users with a tailored experience within this website.

This website uses Google software to monitor its visitors to better understand how they use it. This software is provided by Google Analytics which uses cookies to track visitor usage, but will not store, save or collect personal information. You can read Google’s privacy policy here for further information: http://www.google.com/privacy.html.

We also use different external services like Google Webfonts, Google Maps and external Video providers. Since these providers may collect personal data like your IP address we allow you to block them here. Please be aware that this might heavily reduce the functionality and appearance of our site. Changes will take effect once you reload the page.